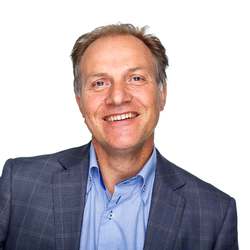 Educated in the Netherlands Henk's career has been closely entwined with the development of new technologies for cordless communication, cellular networks and digital TV.

Henk joined Huawei leading the team at Neul whose technology became the basis for the new 3GPP NB-IoT standard, and who successfully developed the world's first NB-IoT SoC, now deployed in devices for the 100+ NB-IoT networks in more than 50 countries.

In 2017 Henk took responsibility for all of Huawei's R&D activities in the UK, including design centres in Bristol, Cambridge, Edinburgh, Ipswich and London and additional collaborations with universities and business partners across the country.

Prior to joining Huawei Henk has been chief marketing officer at Plextek and sales & marketing director at Symbionics, where he was responsible for standardisation, business promotion and sales, playing a leading role in the growth of the company and its eventual sale to Cadence.

Henk's relationship with CW started when he was head of strategic investment at EEDA, responsible for seed funding the Discovering Startups competition, developing open innovation science parks with BT, GSK and Unilever as well as co-funding 14 innovation and incubation centres including the Hauser Forum and the Gnome Centre (Earlham Institute) at Norwich Research Park. Henk is also a director of Hethel Innovation, a highly successful incubation and innovation specialist.