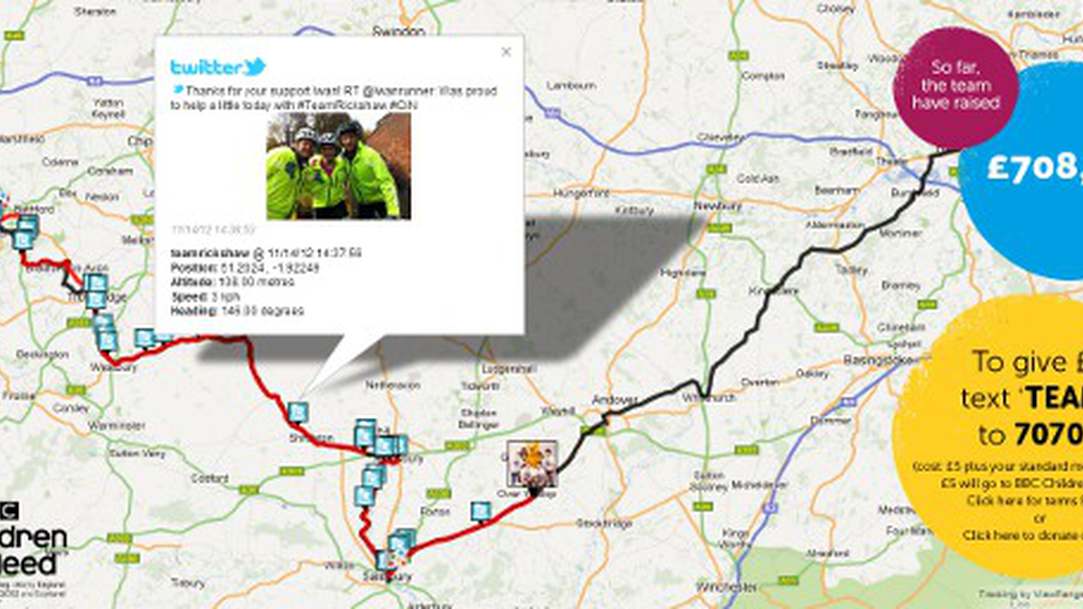 ViewRanger have kitted the BBC Children in Need Rickshaw Challenge team with smartphones and the ViewRanger app, so they can use the app's BuddyBeacon feature to share their real time progress on the road to sponsors and supporters, as well as to assist with navigation and team logistics.

ViewRanger are delighted to be supporting the BBC’s Children in Need Rickshaw Challenge, as they cycle from Landudno to Television Centre in London - a gruelling 411 miles in just 8 days. They started on 9th November and are nearing the finish in London to co-incide with Children in Need evening.

ViewRanger have kitted the Rickshaw Challenge team with smartphones and the ViewRanger GPS app, so they can use the BuddyBeacon feature to share their real time progress on the road, as well as to assist with navigation and team logistics.

As well as showing live progress of the team, the map shows tweets and photos from the team and also tweets of encouragement from supporters and the public.

The Rickshaw Challenge team is made up of six young people who have all benefited from Children in Need funded projects and are determined to show what they can achieve. They hope to better the £1.9 million raised by Matt Baker last year when he went from Edinburgh to London.

The youngsters, supported by Matt, have been taking it in turns to pedal the rickshaw as it makes it way from Llandudno in North Wales to London across demanding terrain and through a variety of weather conditions. Alex Jones has also joined the team, rallying support along the way.

Children in Need raises vital funds for disadvantaged children and young people across the UK. Every day viewers are able to follow Team Rickshaw’s live progress online using the map & tracker page, as they travel from Llandudno to London.

Find out more about the challenge on the charity's website