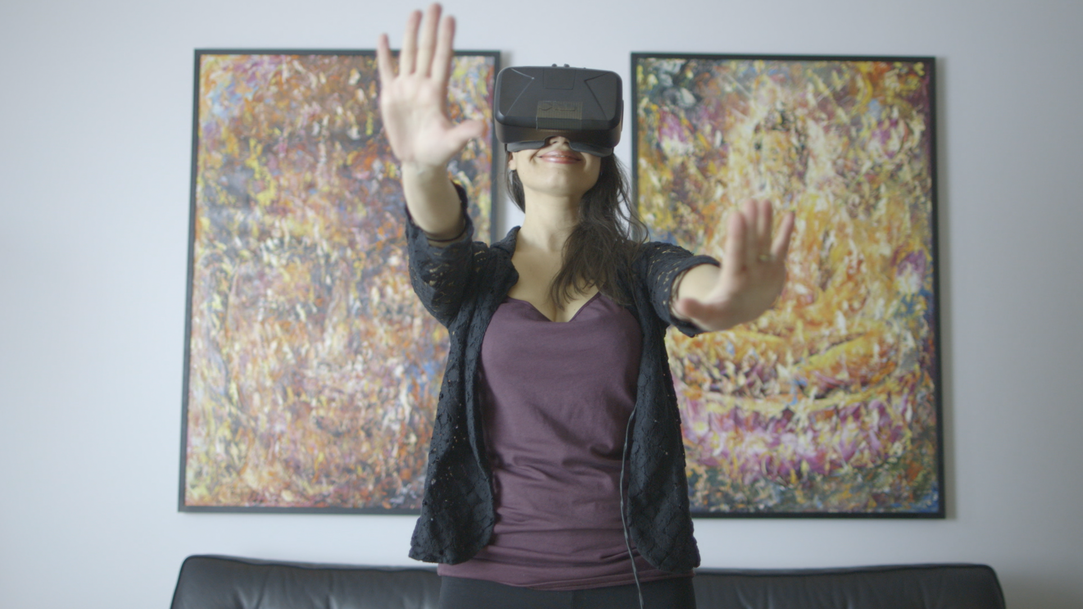 A practical answer is that we know it when we see it – and hear it, and touch it. So, if we want to create a virtual reality that feels real – then we need to recreate those three sensations.

But why does that matter? We can already enjoy amazing virtual reality games and 3D movies.

Early motion pictures had no sound. Audiences of the time were thrilled by the visuals. But, as soon as sound was introduced, there was no looking back, nobody wanted to watch a silent movie ever again. Adding an additional sense had made the old technology obsolete, almost overnight.

Adding the sensation of touch into virtual reality will produce a similar revolution.

But the revolution doesn’t stop there, simulating the sense of touch will also revolutionise user interfaces. What if you could feel the controls that you are adjusting on a flat touch screen? What if you didn’t have to risk looking away from a busy road to adjust you car’s air conditioning or navigation, or to play your favourite song again.

Adding the sensation of touch user interfaces will not only make them easier to use, but can even make them safer to use.

There’s obviously a demand for technology that simulates the sense of touch, but at first glance, the idea seems like magic. Is it really practical, or even possible?

The ideal touch simulation technology has to be non-intrusive (so that means no cumbersome gloves or creepy brain implants) and, for applications like user interface and augmented reality, the technology needs to be invisible, because something that blocks your view is rather defeating the purpose. So, that’s the challenge, and it’s a tough one: somehow we need to project force, invisibly, through the air. Sounds impossible? In fact, sound is the answer/

The solution begins with a phenomenon that is so familiar that it’s usually overlooked: we can feel sound. Sound waves travelling through the air aren’t visible, but they still exert a physical force. If you stand close to a booming bass speaker, you are feeling the music’s impact as well as hearing it, because the energy carried by the sound waves impacts your body and physically moves it. In fact, that’s one reason loud sounds can produce such a powerful emotional impact: they engage multiple senses simultaneously. Just as movies with sound are more…moving than silent films.

But simple low frequency sound waves are not an ideal tool for projecting force accurately, and they’re also very loud. So the scientists who went on to found Ultrahaptics turned to a far more precise instrument: ultrasound. High frequency sound waves can be directed and controlled more precisely, and, unlike a booming bass speaker, they can be effectively silent, because they’re far outside the range of human hearing.

However, although ultrasound provides a means of projecting force invisibly through the air, turning that clever insight into a practical product is far from easy. 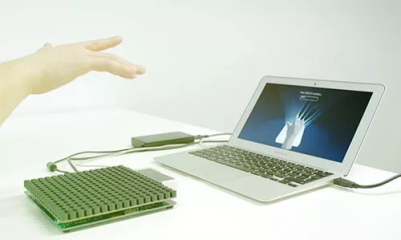 Ultrahaptics’ solution is based on some rather simple hardware: an array of dozens of ultrasound transducers, usually arranged in a flat, square grid. Each transducer simply emits an inaudible 40khz ultrasound signal. The transducers are fixed in place yet they can create the sensation of moving objects, which can track the users hand, like a virtual push-button or dial, flowing water, a strong breeze, or even bubbles bursting against the skin. And they do this invisibly over a range of more than half a meter.

The secret is to control the signal emitted by each transducer precisely. The tactile sensation is created at points in the air where the ultrasonic sound waves intersect, interfere with each other and – only at that point, a few millimetres wide – produce a localised vibration is the air that stimulates the skin’s tactile receptors just as a physical object would.

Ultrahaptics developed sophisticated, proprietary signal processing algorithms to precisely move and position these areas of virtual force by rapidly adjusting the phase and amplitude of the signal produced by each transducer. When updating the localised vibration fast enough it is even possible to create the feel of a textured surface. Camera-based sensors can track the position of the users hand to keep the force steadily focused on the surface of the skin, so users can actually pick up and move virtual objects. The sensors can also recognise gestures as part of a control or user interface system.

The invention combines ideas from mathematics, with computing power, electronics and sensor technology – in fact, without the numerous advances made in these fields during the past few decades, it would not be possible or affordable.

The result is a technology that astounds and amazes anyone who gets the chance to experience it.

"It feels remarkably lifelike,” TechCrunch’s reviewer said. A writer for the respected IEEE Spectrum summed it up in one word: “Wow”.

Virtual Touch is About to Get Real 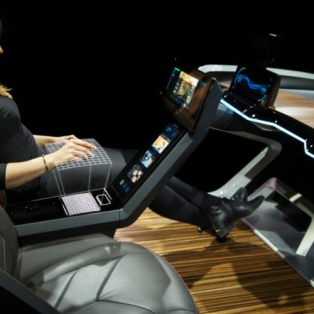 The potential of the Ultrahaptics technology is exciting, but it’s already more than mere potential. Numerous companies are now prototyping and developing new products based on it.

Bosch, the world’s largest supplier of car components, recently revealed a concept car where Ultrahaptics’ technology makes possible an infotainment system with virtual mid-air controls that are easy to feel and adjust without looking away from the road. Other companies, including Harman, which was recently acquired by Samsung, are working on similar control systems for vehicles.

For automakers, adding the sense of virtual touch gives them a chance to stand out in a crowded and competitive market.

Nike and Dell are collaborating with Ultrahaptics on an augmented reality design system, in which designers can feel and precisely manipulate virtual objects for the first time, thanks to the familar sense of touch.

With major international firms getting involved, the sense of virtual touch looks set to make its way into the real world, with the first products expected to be released next year.

Virtual reality is about to get a lot more real.

If you would like to guest blog for CW, please email: cwblog@cambridgewireless.co.uk