So, can the UK secure first mover advantage in 5G? 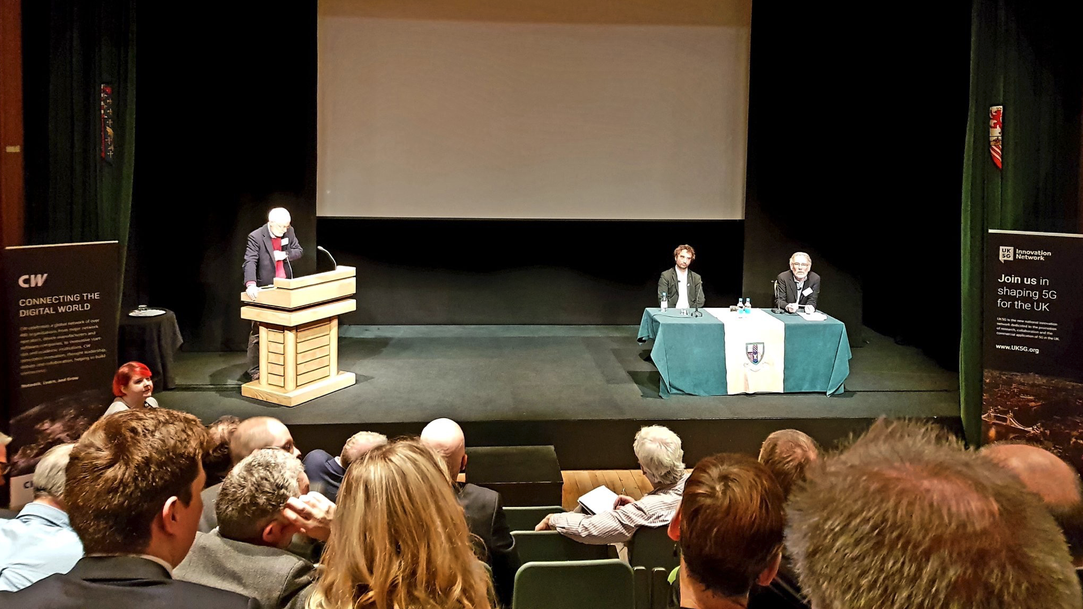 On Thursday 12 April the first ever CW Talks was hosted at Queens' College, Cambridge, and featured Mischa Dohler and Tony Milbourn stimulating debate on the subject of "Can the UK secure first mover advantage in 5G?"

Two decades ago the UK was at the forefront of the mobile communications revolution. Thanks to enlightened regulation, four competing operators emerged in a short space of time who each had spectrum allocated to them and who promptly subsidised handsets while competing very strongly on tariffs. This succeeded in getting mobile phones into millions of people’s pockets.

The UK has strong legacy from these early days, including world class operators and international technology heavyweights, such as Arm. Global competition has emerged in the West in the form of Silicon Valley, and in the East in the form of mass handset manufacture.

Now, with 5G, the UK government has promised over £1Bn to secure the UK’s leadership in 5G. Just recently the 5G spectrum was auctioned and the price per Hz has reduced by a factor of 10 (perhaps the only commodity to have gone down over the past decade)!

Our future transport, business and lifestyle needs will require world class digital infrastructure to underpin them. So my ambition is for the UK to be a world leader in 5G. That means a full-fibre network; a step-change in speed, security and reliability.

So we will invest over £1 billion in our digital infrastructure to catalyse private investment in fibre networks and to support 5G trials.

The question for today is, what can we do to build strength in 5G and which business areas should we focus on?

From a technological point of view, the UK has good spectrum coverage thanks to the previous work of 2G/3G/4G which 5G can build on. This includes:

In terms of base stations, none of the antennas that we now see are set to shrink thanks to a previous generation advancement called Massive MIMOs (large scale antenna systems). While 5G will require a lot of access points, current estimations suggest that the final number will be lower than initially estimated resulting in a reduced national deployment cost – significantly cheaper than 4G – because we have already densified our infrastructure to a relatively sufficient amount.

The core network, based on fibre, is insufficient for the latency levels aspired to by 5G. A typical operator only has 526 packet gateways across the entire country which results in data having to travel huge distances on fibre to make a simple telephone call between networks. The latency this causes is unnoticeable for a voice call but could be critical for ultra low latency applications.

In terms of design, the biggest disruptor will be the decoupling of the hardware and the software in the virtualisation of the network, which is required to greatly reduce the time to implement changes. The ideal would be for 5G to be software running off commodity hardware. On 20 December 2017, Mischa’s office made the first ever “software-ised” phone call having totally decoupled the hardware and the software. By making this move the mobile industry should be able to start innovating in features, rather than in systems – which may mean that a “6G” will not be essential.

For more information on the 5G work that Mischa is involved in, check out his website.

Where the UK is ahead by at least twelve months is in the software that brings everything together - the end-to-end orchestration services. This does not mean the orchestration of an operator’s access network to its core network, but rather intelligent country control. The UK is capable of maintaining its lead in this area because it requires two things that the UK is fundamentally strong at:

Moving on to the demand side, there is no other country on the planet that is currently as engaged with 5G as the UK – the huge number of talks, workshops, newspaper columns and government investment is testimony to this fact. It is as yet known what the disruptor for 5G will be which will emerge post-design. For 3G the disruptor was the internet and for 4G it was the smartphone. The 5G infrastructure must be built to be capable of flexing to handle an unknown.

It is an easy prediction to say that consumer bandwidth consumption will go up. People will watch more videos, download more files – while 4G could handle this, the 5G spectrum will handle it better.

The majority of demand innovation is expected to occur on the business side. The load the Internet of Things places on the network will grow, but 4G is fundamentally capable of handling this increase.  Pre-4G, 15,000 sensors could attach to a single base station without consumers noticing; scale that by the number of base stations on Earth and that is easily 1Bn IoT devices without anyone noticing. However, ultra-low latency applications are a different story. 5G will enable a synchronised reality with applications such as:

Moving to regulation, the government needs to make sure that the laws are fit for 21st century life and technology. For example, public street furniture could be auctioned at a national level rather than requiring operators to work slowly, lamppost by lamppost, to place access points across the country. Could we potentially nationalise the fibre infrastructure to handle peak loads better? How could we improve indoor coverage – could we, for example, encourage individual property owners to set up their own internal network?

Looking at areas where the UK is seen to have an advantage, the list includes:

The UK has double the average expenditure per person on online shopping than comparable nations. Similarly, we are the biggest provider of offshore wind energy (although the UK does not make the wind turbines themselves). The UK is the world’s most open country according to the open data barometer. Many of these industries where the UK is seen to have strength are fundamentally enabled by advanced communications technology. There is a strong link between what this country is good at and what we want to do in wireless communication.

The difference between 2G in the 1980s and 4G/5G today is that 2G was a closed system for making telephone calls. The industry did not need to be sustained by links with other sectors. Today it is a global, cross-sectoral industry enabled by wireless communication. Its place in the world order has dramatically shifted.

Working through the industry step-by-step, the UK has a strong history in research, but which of the other areas (components, terminals, infrastructure, carrier, applications, services) are profitable and attractive to be in? All the value is at the applications and services end and if the UK is to have a leading position in 5G we need to create an environment that stimulates and nurtures this.  The UK government needs to find the balance between being positively influential but not interfering. Ideally it needs to open the door for organisations to access funds from commercial bodies. One area where it has recently done this well, was in investing £600k in ASI Data Science, a company which specialises in applying artificial intelligence to real-world issues, to create a terrorist identification tool for YouTube videos.

The UK will not lead the industry because of a particular company, but onlny if we create a place where government, large companies and small companies can collaborate and grow easily while sharing access to a talented skill pool.

Coverage is where the government can have a beneficial impact. 4G coverage is variable and is only just approaching the 80% milestone, a figure below other countries such as Slovenia and Slovakia. The UK needs mechanisms that limit the cost to the carriers of extending coverage to the 20% of the country that is as yet unconnected, in terms of sites and hardware. This is a problem that, because there is little business viability of doing so unless the cost is subsidised, will not be solved by corporations without government influence.

If we want the UK to be a leader in services enabled by 5G, the country needs to fix the coverage and performance issues and make the UK the right place for the global concentration of 5G skills and innovation. If we can build that skill infrastructure then the businesses will take care of themselves.

Details on the next CW Talks will be released soon; check out the CW Events page for more information.

Unlock the power of the CW community

Become part of our successful community of world-leading companies, partnerships and people