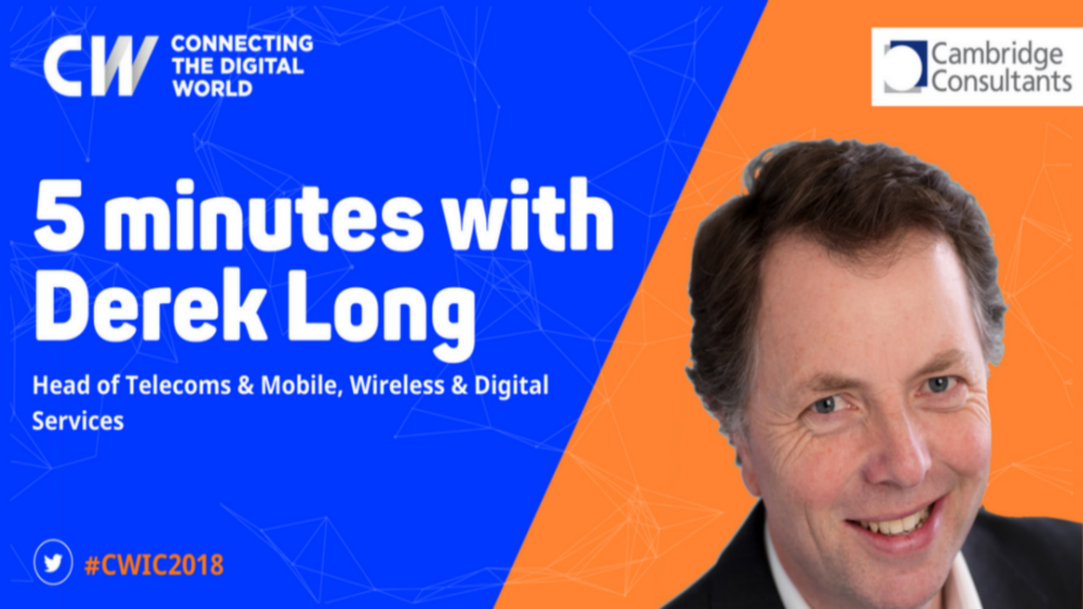 In November 2017 we launched our annual technology conference - CWIC 2018 which is taking place on July 4th at Hinxton Genome Campus in Cambridgeshire. This years theme is ‘Beyond the Hype’ and the conference will be celebrating its 10th year so it’s a major milestone for the organising committee.

We caught up with Derek Long, Head of Telecoms & Mobile, Wireless and Digital Services for Cambridge Consultants who is on the 2018 CWIC committee.

Q: What is your role at Cambridge Consultants

A: At Cambridge Consultants I am Head of the Telecoms and Mobile Campaign. In this role I am responsible for all business that we perform for companies operating in the telecommunications industry. This includes operators and system vendors but can also include semiconductor suppliers and technology providers also working in that industry.

Q: When did you first start out in the world of tech?

A: I have worked with technology all my career starting with my PhD which was sponsored by BT and looked at air interface technologies to reduce the power consumption of handheld terminals. Since then I have had various roles from working in small companies, working as a consultant to also working for global operators and vendors. Like many people at school I was fascinated by maths and physics and I went on to study engineering at University and then started work as an engineer working with quality assurance. Over time I also worked with the business side of technology innovation and ran a technology incubator for a few years. In my role at Cambridge Consultants I am able to combine many of my experiences from the technical side as well as from business.

Q: Tell us about your involvement with CW

A: I started off in 2016 as Champion in the security SIG. In that role my focus was on cybersecurity and we organised several conferences looking at for example security in IOT and also on a broader level on security on a national level. This year I have also taken on a role on the organising committee for CWIC 2018. We meet on a weekly basis and discuss topics such as the overall theme and organisation of the conference as well as which speakers and which specific topics they should address.

Q: What are you looking forward to the most by being on the CWIC Committee?

A: I'm really looking forward to the event next summer. In my opinion it is the foremost CW event of the year although the CWTech conferences are also major events. These events really attract a large crossection of the UK (and to some extent European) high tech ecosystem. It’s a real pleasure to get to meet these people to discuss their plans and ideas and to find out what is going on in the industry. In CWIC 2018 I am also responsible for the Blockchain session and I'm really excited by the discussion that I'm hoping to provoke around the use of Blockchain technologies in communications. We have a number of excellent speakers lined up and I am looking forward to being able to throw some light on this very new area.

Q: What do you think the biggest innovations and challenges will be in your sector in 2018 or beyond?

A: 2018 is going to be a big year for the telecommunications industry.
On the one hand there is 5G. Initial standards will become available, there are the Olympics in Korea early on in the year and there is a lot of pressure in the US to launch the first services. This brings with it a whole raft of new technologies and although 3GPP standardisation opens a large market there is always an element of risk. New technologies of interest are in my opinion on the radio side - phased arrays, mmWave frequencies and potentially new waveforms.

Secondly there is the continued development in what I would call digital services. It’s well known that operators are squeezed between the competing forces of infrastructure costs proportional to peak traffic load and revenue driven by Over The Top players. The internet of Things is one initiative to enable operators to provide value added services to their customer base and there are many examples such as connected cars, smart cities and precision agriculture to name just a few. An interesting recent development is the rise of intelligent assistants which have to a certain extent put focus on voice communications. Perhaps we'll see some growth in intelligent voice based services. Perhaps we'll also see a change in device form factors enabled by the ability to communicate by voice and not via a keypad meaning that smartwatches and similar might replace smartphones as the most popular form factor going forward.

Finally there are new technologies on the horizon which are going to have an increasing impact on telecommunications. For example, the use of AI to automate increasingly complex networks and to provide enhanced quality of service. Blockchain also falls into the group with the first applications being explored in subscriber and resource management. I think we'll see a lot more happening in this area throughout the year.

Q: What is your top reason for attending technology conferences?

A: I attend a lot of conferences during the year and I really have 2 reasons for attending. The first is to get an overview of the latest developments in the industry. Conferences provide an ideal way to get access to a large number of companies and to find out their latest products and services in a short space of time. The second reason is the ability to network. This means not only reconnecting with people I already know but I also really enjoy meeting new people on a mission. So, I often talk to presenters, people on the stands as well as other participants and I find that I get into the most unexpected conversations with people I meet either talking about the market for technologies or speculating about which innovations are going to become mainstream in the near future.

Q: Derek, with Christmas just gone, can we ask what tech/ gadgets were on your wishlist?

A: Where do I start? As you can tell I'm a very technology focused person however as you're asking, here are some ideas

For more information on this year’s theme, why not read our kick-off blog here and you can nominate a speaker here.