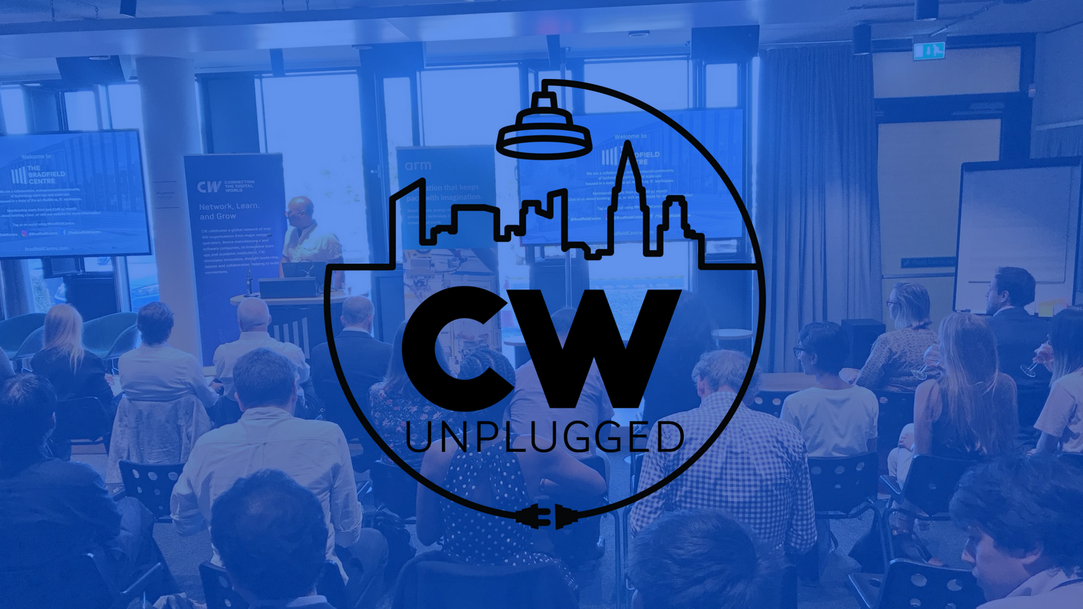 CW Unplugged events bring together innovative start-ups, impact investors, designers and engineers who won’t be scared to ask the tough questions and who discuss solutions. Our most recent Unplugged event on Tech for Water was no exception!

Delivered in partnership with The Centre for Global Equality, the CW community came together for an afternoon to discuss how we can improve water technology in both developed and developing countries.

The featured ventures would present their two questions/problems to our audience which would then split into teams of ten for the ideation workshops led by Cambridge Consultants, Dovetailed and Fresh Perspectiv with all three groups coming together at the end to discuss, debate and deliberate amongst one another.

The Centre for Global Equality

After a warm welcome from Abhi, the Executive Director of the Centre for Global Equality, Lara Allen, spoke to us about who the CGE are and what they focus on.

The Centre for Global Equality is Cambridge's International Development Network who have created an enabling environment for the evolution of innovative solutions to global challenges.

Within the network, they run three different programmes:

The Cambridge Cultivator provided us with the three ventures that were focused on at the evening's event:

Before we were introduced to the evening's three ventures, attendees heard from Ghislain Juvanon, who works for water company Anglian Water and their project Shop Window. 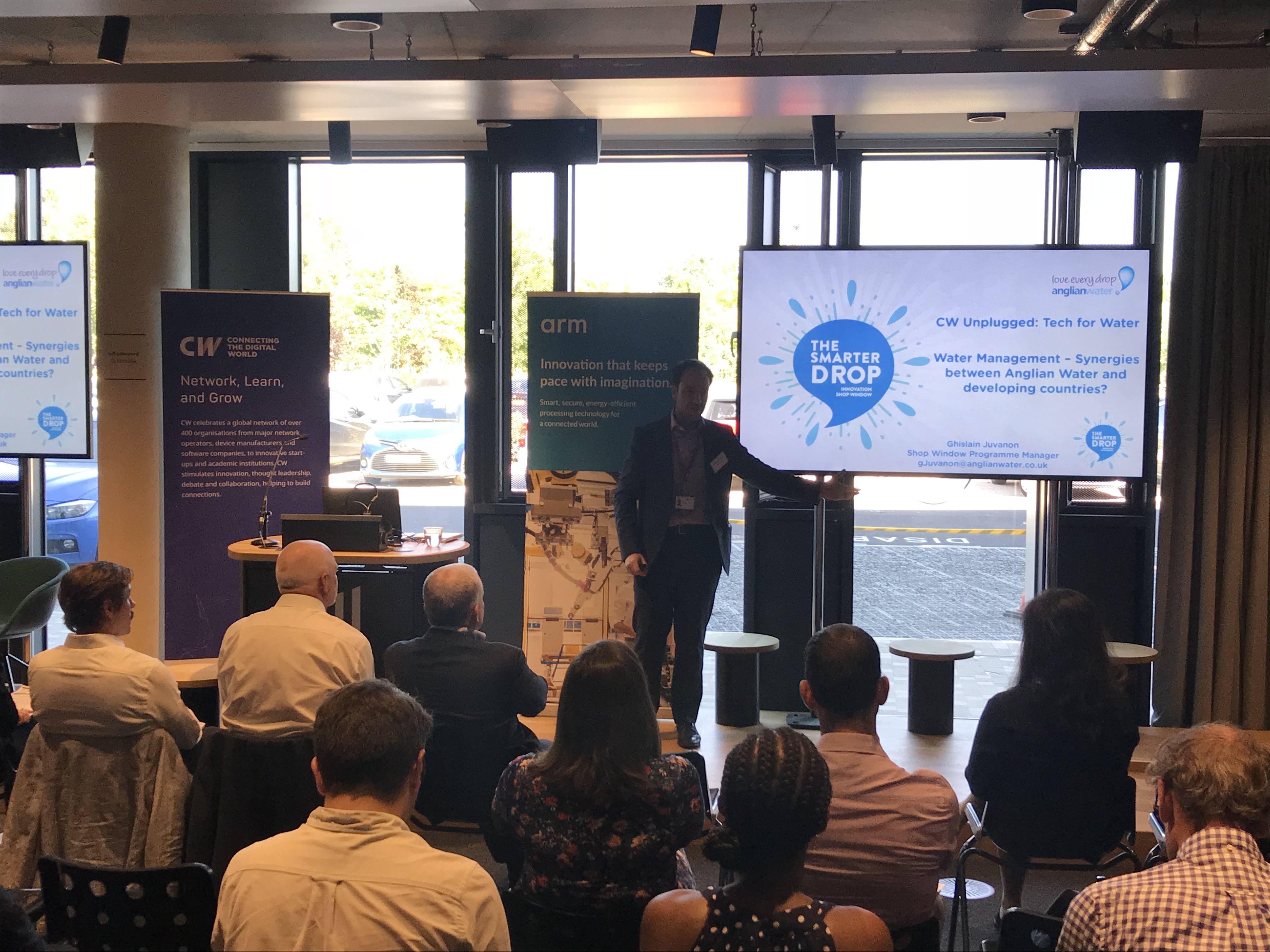 Anglian Water has a close relationship with the international not-for-profit organisation Water Aid. Both organisations worked in Nepal together to provide functional and sanitary water within the communities over a five-year period. The industry-wide challenges that Anglian Water and Water Aid work on together combine with those specific to their region to drive innovation.

Altogether, Anglian Water and Water Aid work alongside 105 organisations including Allia, Arqiva and Siemens with them working on 95 projects together.

It's an obligation, not an option.

The first venture to present was WaterScope; a venture working towards enabling simple, affordable bacterial testing for water.

Alex Patto, CEO of WaterScope opened up his presentation with impactful facts such as:

A start-up halfway through their third year, WaterScope believe that current testing systems in place to test for clean drinking water are slow, expensive and complex but WaterScope have come up with solutions that will make this testing easier for all:

But what are WaterScope planning on working on to acheive these solutions? 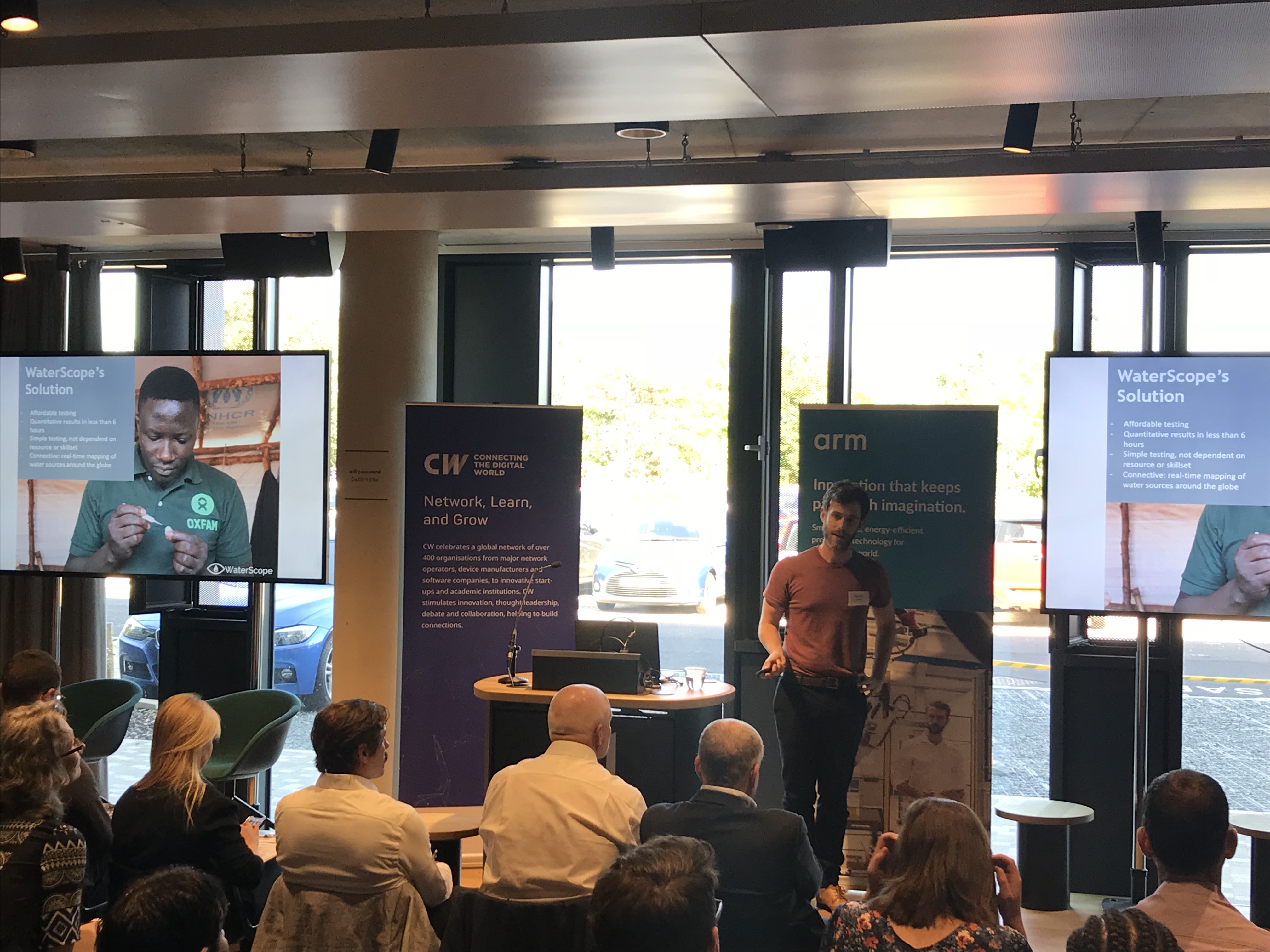 WaterScope are currently working on two different technologies which they hope will help them to achieve their solutions.

Alex mentioned what the next steps for WaterScope were:

To end the presentation and to get attendees prepared for the ideation workshops, Alex posed WaterScope's selected questions which were:

The next venture of the evening’s event was BlueTap, a company aiming to build a local water entrepreneurship movement, implementing both cleaner water, local jobs, a cleaner environment and a more stable economy.

Becky Donaldson, COO of BlueTap took to the stage to discuss some of the problems that BlueTap and Mexico City have faced: 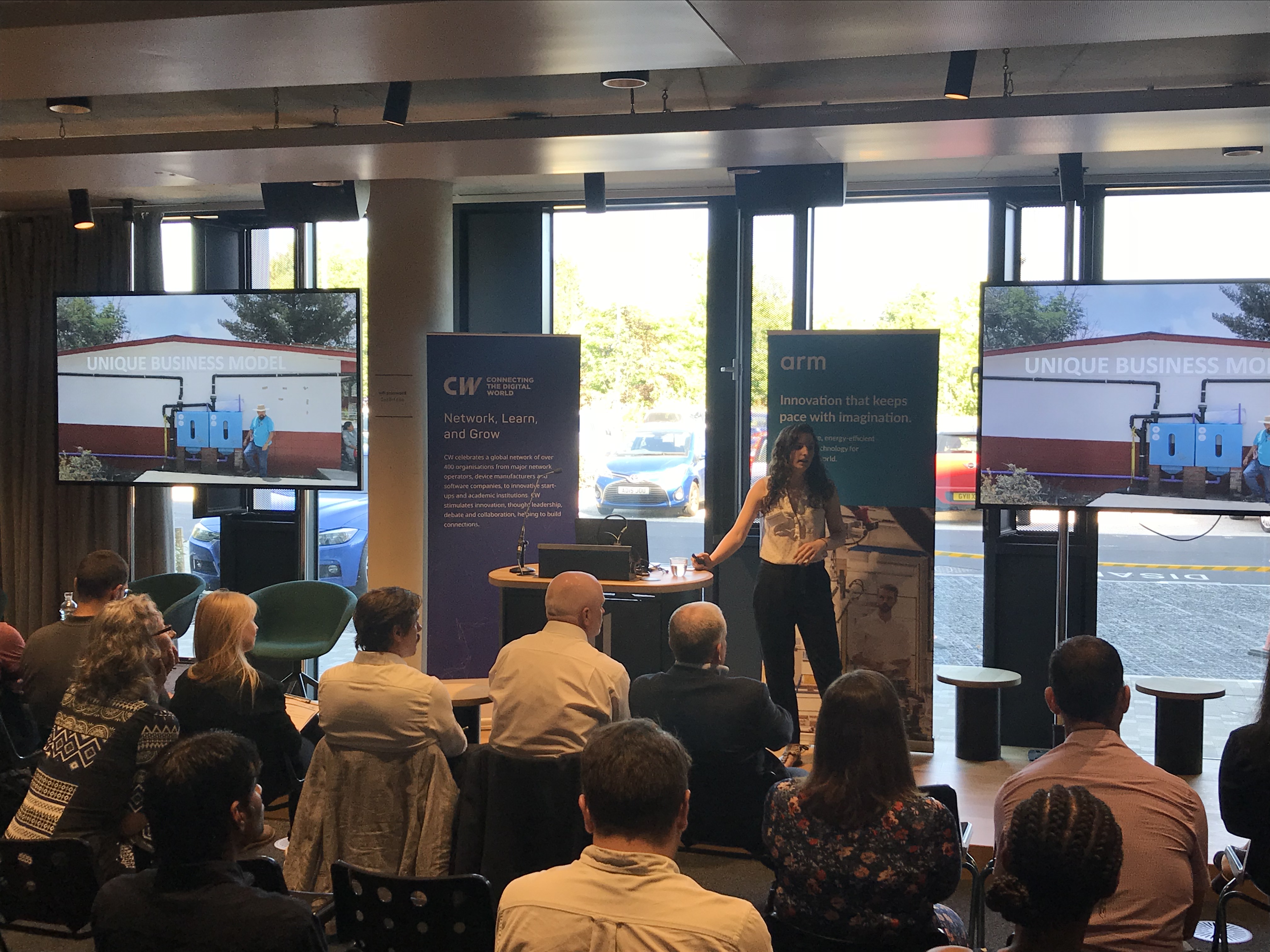 Becky explained that in 2013, the residents of Mexico City requested a solution and that is where BlueTap came in. BlueTap are currently working towards producing 3D printed chlorine injectors which will help to distribute chlorine evenly as well as:

After explaining BlueTap’s solutions and accolades to attendees, Becky went on to list the one tech question and two business questions that BlueTap were asking for the ideation workshops:

Business Question 1: What are the difficulties associated with being a business that operates within the UK but solely has clients abroad in the developing world?

The last venture from the Cambridge Cultivator to present was Majico who are a social enterprise aiming to empower communities with sustainable technologies with their water purification systems being powered by sunlight and can destroy pollutants and microorganisms providing safer and cleaner drinking water.

Mike Coto, one of the three founders of Majico presented to attendees some facts about access to clean drinking water:

Similar to BlueTap’s fact on the use of bottled water in Mexico City, Majico also provided a fact that the still bottled water market is worth $1 billion +10% CAGR with private water vendors on the rise due to a lack of infrastructure providing clean and safe water, with 38% of people in Tanzania using plastic bottle water.

Mike discussed with attendees how Majico were to distribute their solar-powered purification technologies with subscription-based models suggested as well as the idea of building the technology locally, whilst leasing them nationally and the Majico team to be on hand throughout. 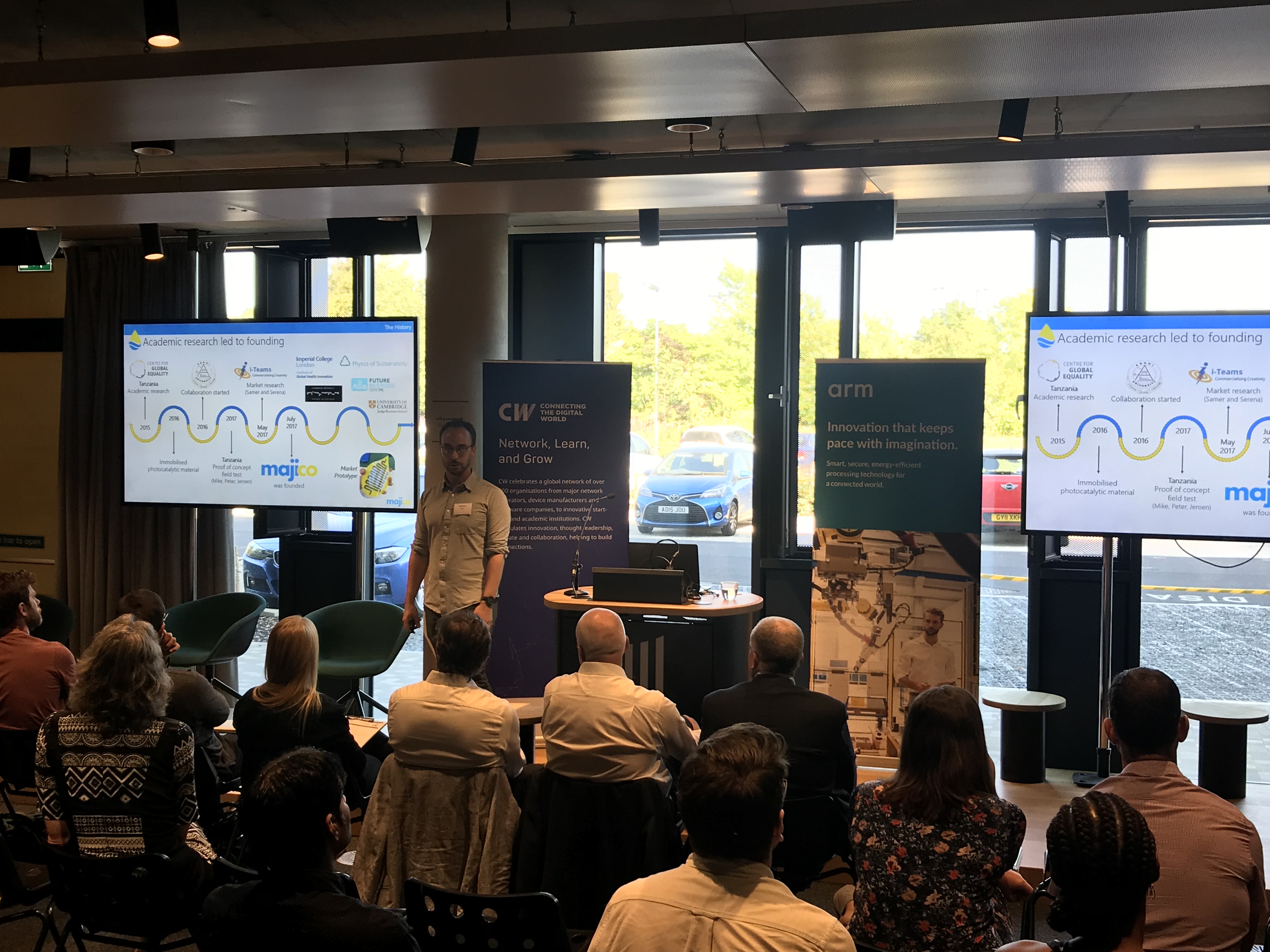 To conclude their presentation, Mike gave the attendees the questions that were to be discussed further during the ideation workshops:

Attendees were split into three separate groups, (one for each venture) with Fresh Perspectiv leading the WaterScope workshop, Dovetailed leading the BlueTap workshop and Cambridge Consultants leading the Majico workshop.

After having an hour to discuss solutions to the problems/questions raise by the three ventures, attendees assembled in the auditorium to discuss their findings and ideas from the workshops. 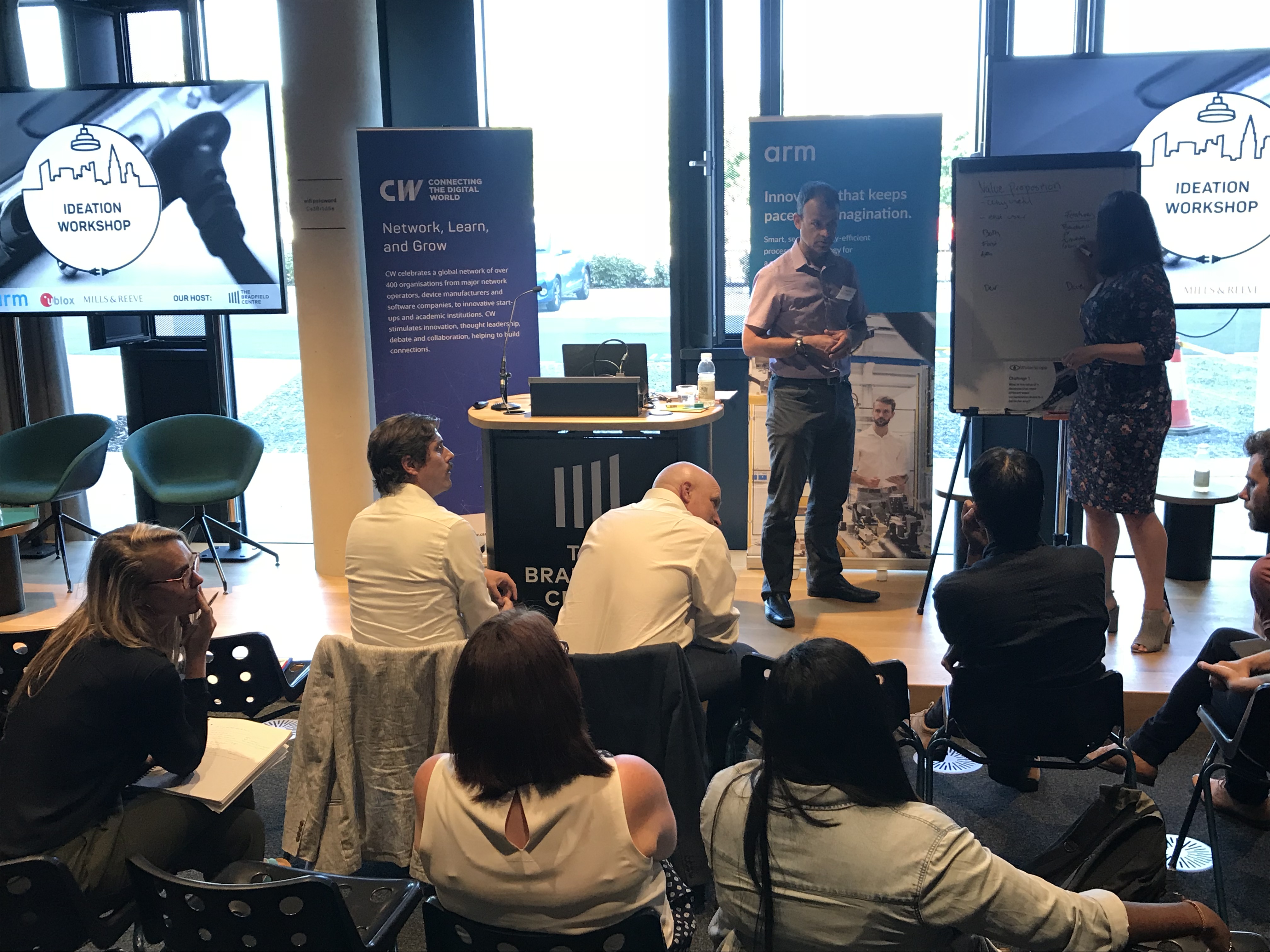 The first to present their ideas were Nigel and Lucy from Fresh Perspectiv who were representing WaterScope who focused mainly on the value of a database that maps different water contamination levels in a particular area.

The group suggested that a variety of people may be interested in this database:

Who may be customers of the database?

Overall, all attendees that were in the WaterScope thought the there was real value with the technologies that were presented as well as the idea of having a database online for people to have access to one way or another.

The next venture to present their ideas was BlueTap with Francine and Hai-Dao leading the workshop.

The size of the filters and the distribution

One of the first things discussed within the group was about the size of the chlorine injectors and the distribution of said injectors amongst the community.

A key thing mentioned was that the injectors need to be adaptable to all sizes of pipes, or that there needs to be a variety of injectors made in different sizes.

But, the most discussed issue within the group was about the distribution of the injectors with many ideas being circulated around the group such as:

The last venture, Majico had their ideas presented by Iain from Cambridge Consultants.

Long-term data trends were also discussed and when it may be likely that problems may interfere, with the biggest problem being mentioned being the weather. As a system which will be relying on solar light, the weather may cause problems due to unpredictably and changes in seasons.

The second question that Majico imposed on the attendees was how this system can be marketed amongst different audiences, or ‘personas’. The personas that were discussed were:

Majico did announce that they were hoping to have a product finalised by summer 2019 although this has not been officially cemented.

After all three ventures took to the stage to present the ideas discussed within their group and listen to other attendees debate these, the next steps following the event were discussed:

The challenge from this event, like other Unplugged events, is not what happens within the event but what we, as attendees, hosts and ventures do to work towards solving the problems faced within this event.