Connected Devices: what is the future of blockchain?

The CW (Cambridge Wireless) Connected Devices SIG teamed up with the Cambridge IoT Meetup along with Toby Simpson, the Co-Founder and CTO of Fetch AI, Amy Cameron of STL Partners and Dr Antony Rix, CEO of Granta Innovation, to mull over the question “Is blockchain a waste of resources, or is it the future of networking?”

It appears that the first rule of blockchain club is not to be able to explain blockchain. To anyone.

With these words, Toby started the evening’s events in the Bradfield Centre. Blockchain is a widely known but poorly understood phenomenon. Explanations are either approachable but meaningless, or complicated to the point of obfuscation.

The problem that blockchain originally solved in order to make a functioning decentralised digital currency is: trust. The technology enables you to trust in what you can see if you are caught in an environment, such as peer-to-peer lending, when you do not know who to trust. It enables inclusive, un-centralized, yet controlled processes. It is a method for a decentralized network of many to reach consensus about every action, resulting in a single, communal truth.

Are we members of the blockchain club yet?

For a better description, check out the original paper on bitcoin by Satoshi Nakamoto, the creation of which launched the first blockchain database:

What is needed is an electronic payment system based on cryptographic proof instead of trust, allowing any two willing parties to transact directly with each other without the need for a trusted third party. Transactions that are computationally impractical to reverse would protect sellers from fraud, and routine escrow mechanisms could easily be implemented to protect buyers. In this paper, we propose a solution to the double-spending problem using a peer-to-peer distributed timestamp server to generate computational proof of the chronological order of transactions. The system is secure as long as honest nodes collectively control more CPU power than any cooperating group of attacker nodes.

Peeking out from anyone’s attempted explanation is the fact that the potential of blockchain is expansive and many industries (outside of the venture capital space) are already seriously investigating its implications. During the brief Open Forum at this meetup alone representatives from the worlds of telecommunications and energy each sought recommendations from the audience on how their organisations might best adopt the technology.

The hype around blockchain is reminiscent to the launch of the internet in the 1990s, as is the ignorance of where this solution might one day lead. As Antony from Granta Innovation reinforced, the peak market value for cryptocurrencies hit $830Bn on 8 January, four days after the peak daily volume of $72Bn – almost 10% of the entire market value traded on a single day! They are the size of a small country in terms of GDP, yet despite this vast scale, in 2017 there were only around 115 companies actually developing technology for that market, predominantly in the infrastructure side of things rather than the application or operator end and the top 5 companies represent 72% of total market capitalization, according to a report by the Judge Business School.

And the blockchain market continues to attract unprecedented interest from venture capitalists, as exemplified by a Cayman Islands based blockchain start-up, Block.one, raising $4Bn in June without a launched product. So what is actually behind this technology? What is its potential, and what is standing in its way?

The chief and most widely publicised source of concern for blockchain is the amount of energy it requires, and this cannot be denied. What can be hoped for (if Moore's Law holds true) is that computational efficiency of hardware will continue to increase, meaning that as demand grows the market should be able to handle processing requirements in a better way. The IBM360 in the 1960s processed 34,500 instructions per second and had up to 64KB RAM. Today an Apple Watch can compute 3Bn instructions per second with 768,000KB RAM. Blockchain is still in its early days and by the time it is reaching its full potential, the hardware available will look entirely different to today. While it is a cause for concern, it is also important not to confuse what we see now with what will be the case in the future. And, as one questioner in the Open Forum highlighted, who knows what quantum computing will bring.

A further issue highlighted by Toby is that while blockchain technology is usually applied to sensitive, business critical processes, when you have a developer working on this and they don’t know what they are doing, the results can be devastating. Take, for example, Parity’s Ethereum wallet freeze. This is not eased by the fact that while the coding language used for blockchain is extremely similar to JavaScript, it is not JavaScript. It is Solidity.

Do you even need blockchain?

There are many different alternatives to blockchain that are similar, but less well publicised. One highlighted at the event was the Version Control System Git.

Each variation has its own benefits and can solve different business problems – it is definitely not the case that an organisation will always require a blockchain based solution if they are looking to verify trust in a transaction.  With so many versions out there, how can an organisation tell what to use - if any at all? For most you will be led to the conclusion “you don’t need blockchain”. They only work in a few numbers of “distrust” scenarios and have a seriously heavy overhead both in terms of energy and regulatory uncertainty. 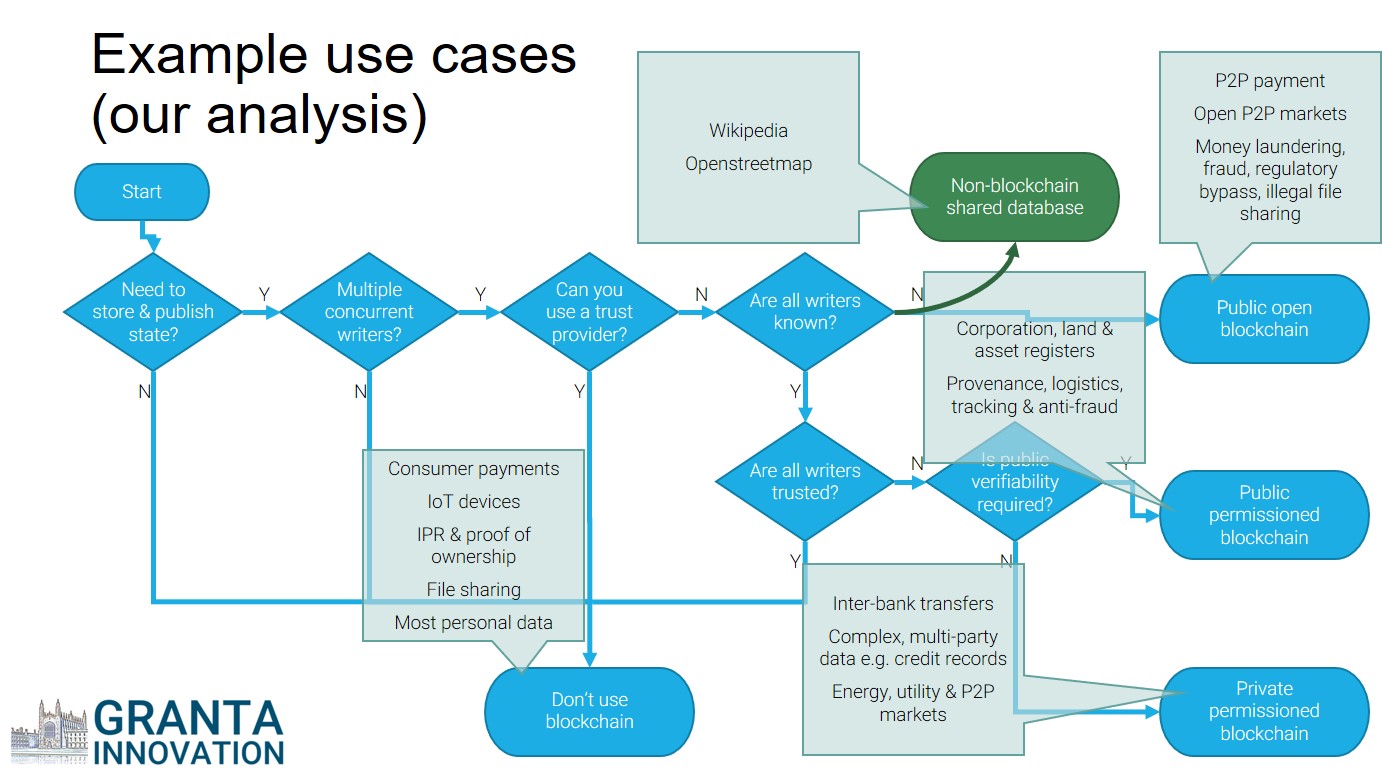 Ref: “Do you need a blockchain” by Karl Wüst and Arthur Gervais, ETH Zurich

…Or, completely new business models, such as Fetch AI. The approach that Fetch has taken to using blockchain technology is to develop a virtual world (“Open Economic Framework”) where digital, autonomous economic agents with real-life properties and a level of artificial intelligence can be deployed to run smart simulations – it is a vast “proof of work” system. Underpinning this world is a smart ledger technology capable of supporting millions of transactions a second that provides integrity in what is a decentralized network and helps each autonomous agent find the shortest possible route to getting what he wants. Current markets being explored include energy, transport and supply chain logistics.

“Blockchain is absolutely not just a cryptocurrency; please, please, please do not fall into that trap. What it will mean is that the roles of middle-men or intermediaries in the world will change. And you know what, you can stand on the beach all you want telling the tide not to come in, but it is going to happen eventually.”