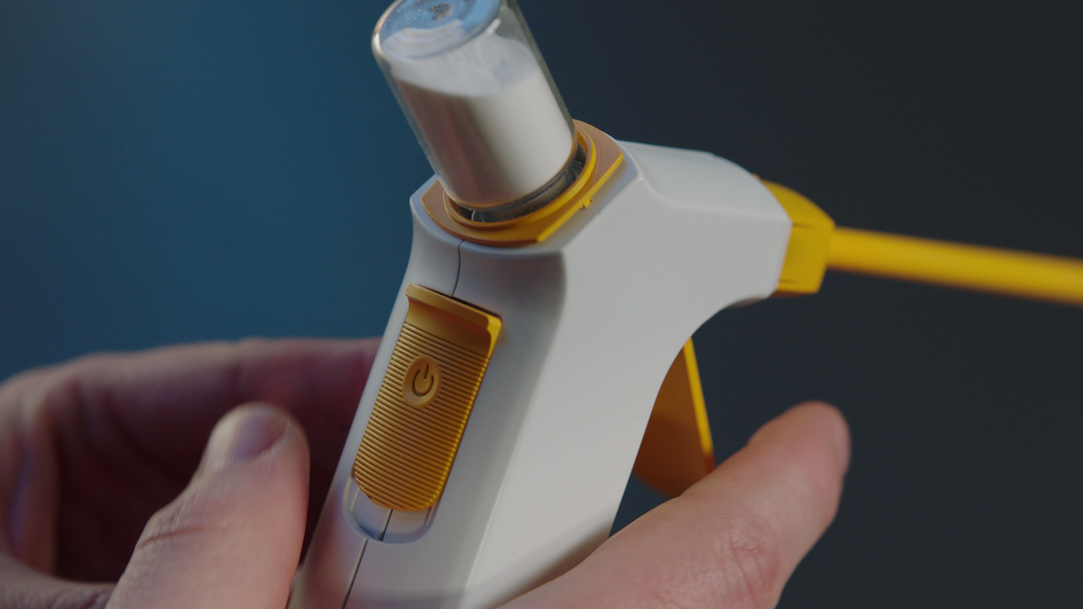 Stopping bleeds quickly and efficiently during surgery save lives and saves money[1]. A recent study from the British Medical Council found that 30% of speciality inpatient surgeries involved a bleed during the procedure which increased the length of hospital stay (BMC).

Team set about developing a powder sprayer which could never cause embolism. Convesaid’s ingenious airflow design uses the Coanda principle – the tendency of an airflow to follow an adjacent curved surface - to ensure that only the haemostat powder exits the device. No air leaves the device and hence the sprayer is intrinsically safe.

How does it work?

The battery powered pump inside Convesaid creates a stream of air, which picks up the haemostat powder particles and blows them out of the end of the device. The air however is funnelled round a smooth cure in the tip of the device and back to the pump. No air ever leaves the device.

Convesaid is intrinsically safe. It’s also simple to operate, reliable and cheap enough to be disposable - Team estimates the device would cost around $15 to manufacture.

We’ve taken Convesaid from an initial concept, all the way through to a fully functional proof-of-principle device.

Following initial design concepts and math modelling of the airflow, we created the first prototype. It functioned really well, but initial feedback suggested it was too large, so we set about creating a smaller handheld device which was cheap enough to be disposable.

The new design is compact, featuring a redesigned layout, as well as a lock-out which prevents the trigger from moving until the device is switched on.

User feedback was invaluable throughout the process, and this is typical of the way we develop products for our clients: we develop devices from understanding user needs, through design, lab testing and user studies – all the way to scale up and manufacture.

Convesaid gives surgeons the ability to stop a variety of bleeds in a rapid, accurate and safe way. It takes no time to set-up and is unencumbered by any air lines. Convesaid will give haemostat manufacturers the ability to deliver haemostats more effectively, more conveniently and, above all, more safely than ever before.

Get in touch with Ben if you’d like to know more about Convesaid or explore how Team could help you develop your new products.