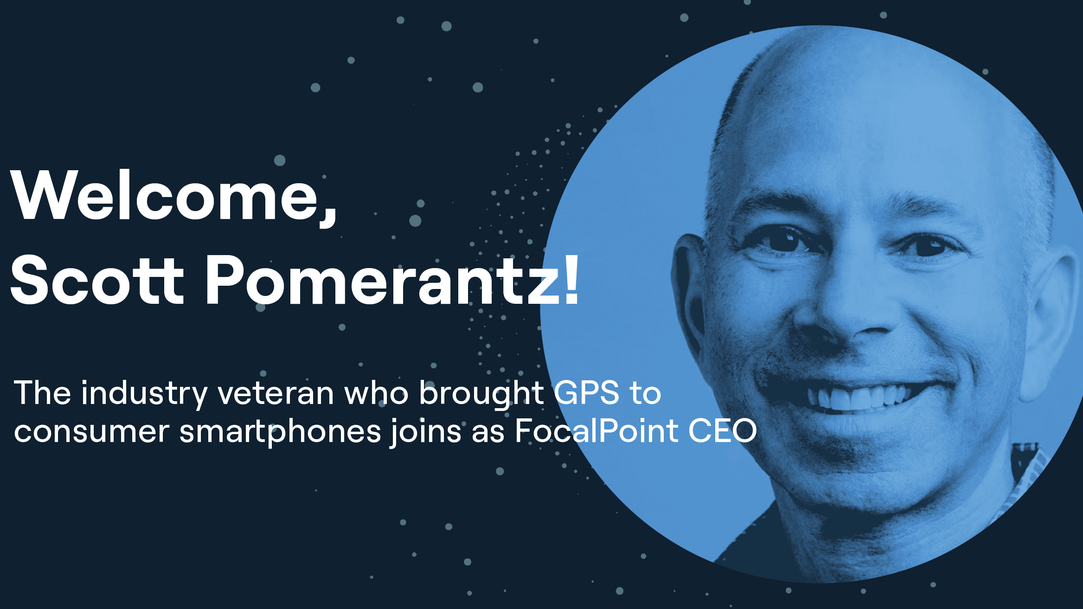 Cambridge UK, Tuesday 7th September 2021
Focal Point Positioning, a UK-based deep tech start-up whose patented technology dramatically improves the performance of GPS chips in smartphones, wearables and vehicles, has announced the hiring of a new CEO and the establishment of US subsidiary FocalPoint Inc to accelerate the commercialisation of its technologies in the mobile, wearables and automotive sectors.

GPS expert Scott Pomerantz brings 30 years of experience in positioning and semiconductors. His company Global Locate won the race to bring GPS to the mass consumer smartphone market, supplying the first GPS chips to companies including Apple (NASDAQ: AAPL) and Samsung (LON: BC94), before being acquired by Broadcom (NASDAQ: AVGO) for $250m, including an $80m earn-out, in 2007.

Pomerantz joins FocalPoint at a time of intense growth following a Series B round of investment led by VC firm Draper Esprit(LON: GROW).

FocalPoint’s core Supercorrelation technology is a chipset-level software upgrade that uses patented methods to increase the sensitivity, accuracy and reliability of GNSS receivers by detecting and rejecting false signals - including those reflected off buildings and spoofing signals.

New CEO Scott Pommerantz commented: “FocalPoint’s technology portfolio is truly novel and groundbreaking. I am convinced that this is an inflection point for the positioning and semiconductor industry. Their technology solves an industry-wide problem and creates phenomenal opportunities for businesses who depend on the accuracy, reliability and security of location and timing information.”

“Having spoken to the team, customers and investors I am extremely confident that on the three vectors that really matter: technology, customer traction and company culture, FocalPoint is in a tremendous position.”

“We have great technology, an extremely strong IP position and one of the most impressive technical teams that I have ever come across.”

“We now need to scale up our technical support and customer integration so that we can maintain our development speed on IP and R&D while servicing customers and commercializing our technology.”

FocalPoint Founder Dr Ramsey Faragher commented: “When I established FocalPoint, one of my goals was to grow the business and IP portfolio to a point where we could attract one of the industry's great CEOs to help us to complete our vision of powering the positioning of all GNSS receivers worldwide. I am thrilled to have succeeded in that goal and look forward to working with Scott on our next chapter ”

Faragher will work alongside Scott as the President and Chief Technology Officer (CTO) of FocalPoint, focusing on accelerating the firm’s technology roll-out and R&D activities.

Draper Esprit Venture Partner David Cummings who led FocalPoint’s recent Series B funding round commented: ”We are extremely pleased that Scott has decided to join the FocalPoint team. He brings unparalleled experience in scaling start-ups and has a wealth of expertise in dealing with the leading hardware and software players. We are excited to see FocalPoint take another step on its impressive growth journey.”

FocalPoint was founded in 2015 by Dr Ramsey Faragher. The team includes alumni of the UK aerospace industry, The European Space Agency, Cambridge, Oxford, UCL and Imperial College. Investors include: Draper Esprit, Passion Capital, IQ Capital, Cambridge Angels, Rockspring Nominees, Cambridge Innovation Capital and Demis Hassabis. Its technologies have been awarded top accolades by the UK’s Royal Institute of Navigation and the US Institute of Navigation.

The company’s two product families are Supercorrelation and D-Tail™:

It was named Europe’s Hottest SpaceTech Start-up at the 2020 Europas Awards.

In 2020 FocalPoint signed a deal with u-blox, a European chip manufacturer, to license Supercorrelation technology within their GNSS receivers.

Scott Pomerantz started his career at IBM and Kodak Eastman, before leaving to found a series of positioning-focused start-ups. He founded Global Locate Inc in 1999, a fabless -semiconductor company that produced Assisted-GPS ASICS and software for wireless devices and networks, including Apple (NASDAQ: AAPL), Samsung(LON: BC94), Tom-Tom(AMS: TOM2), Siemens(ETR: SIE), Nokia(HEL: NOKIA), RIM/BlackBerry and Motorola(NYSE: MSI). The company was acquired by Broadcom Corporation (NASDAQ:BRCM)/(NASDAQ:AVGO) in 2007 for $250m.

Following the acquisition Pomerantz led Broadcom’s GPS and NFC business, before being made SVP and GM for connectivity, Broadcom's largest P&L at the time, at approximately $3Bn in annual revenues.

He left Broadcom to become President and CEO of MC10, a medtech company focused on epidermal electronics, which he led from 2014-2018.